HAMFEST INDIA 2018 will be held in the silicon city of Bangalore on December 29th and 30th 2018. e will be setting up an exhibition area related to amateur radio satellites and some technical talks. Please visit www.hamfestindia2018.com for more information and registration.

AO91 and AO92 satellites have created a significant interest among the Indian Amateur Radio fraternity. Many Radio hams from all over India are building and experimenting their new antennas on these two satellites and enjoying two way contacts even during late night and early morning pass. Some of them are also working through SO-50 and IO-86 (Lapan-2) satellites. Looking forward for more activity from India on the Easy Sats.

We are pleased to announce that as of September 21st 2015 Somashekar, VU3JBA has accepted the role of Director, Regional Coordination at AMSAT INDIA. He will be responsible for driving programs and projects of AMSAT INDIA in various parts of India through his team of Regional Coordinators.
We have also appointed Rajesh Vagadia , VU2EXP as the Regional Coordinator for West Zone and Kaustav Saha, VU2UUU for North Zone in India. We will be shortly announcing the names of coordinators for East and South zone.
With this new roles we will be able to reach out to the Amateur Radio fraternity and student community across India to develop interest and activity on the Amateur radio satellites.

Paddy , VU2PEP shared an update that he was able to work and hear some stations from south east asia when the FM transponder was opened up for testing on November 21st and 22nd . A video of the pass with audio is available at youtube  https://youtu.be/yUR6yhdIX9s

An Amateur Radio on the International Space Station (ARISS) contact has been planned with participants at SK Putrajaya Presint 9, Putrajaya, Malaysia on 01 November. The event stated at 16:45 Indian Standard Time at 9M2RPN Satellite Ground Station located in Planetarium Negara.VU2TS,VU2DCT & VU3TYG were able to hear on 145.800 Mhz  Astronaut Gregory (KF5LKT) answer interesting questions by the school children.Thanks to Sangat,9M2SS for providing  the headsup of the event. 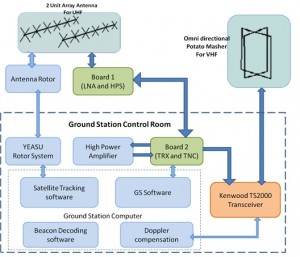 The integration of the LX0OHB-4M amateur radio payload was completed on Sunday night, October 12 and is now ready to launch.

The onboard clock has been adjusted to start JT65B (145.980 MHz) at the UTC minute +/-1 second. It is likely to drift during the mission, and manual offset introduction will be required after a week or so. The launch date is October 23 at 1800 UTC.

The link budget is quite tight, but the first hours should give comfortable signals. QSB is to be expected.Beginning of transmission of 4M will start between 1917 UTC and 1927 UTC. Refer to the provided maps and animations links in the blog section (see also older messages) to determine your visibility. Alternatively, use the ‘tracking’ section where you can compute your tracking elements by introducing your geographic coordinates. The table can be copied/pasted into a text file. As the apparent movement will be close (and closer) to the one one of the Moon, manual pointing is easy but for the largest arrays. We’ll try to publish equivalent TLE’s to input in usual tracking software.

As JT65B is used: please remind those not yet too familiar with it that the receiver must not be tuned during the transmission. A dedicated webpage is being written to detail the procedure.A dedicated java application is also available to automatically transmit the decoded messages to the 4M website and ease the data collection. (Thanks to LSE Space). Alternatively, you can also send the decoded messages by eMail, sending the ALL.txt file.

For those not wishing to use JT65B, please record the signals (11025s/s, 8or 16 bits, mono), taking care not to saturate the recording and NO MP3 please.

SpectrumLab is an excellent choice, although some may wish to use simpler recording software.

Basic rules of the contest have been delineated in the blog section. Complete rules will be published soon.

The November issue of Practical Wireless (PW) magazine, in the shops now, devotes three pages to the 4M amateur radio lunar payload which will transmit JT65B on 145.980 MHz. Beijing plan to launch the payload on October 23. The article, written by Colin Redwood G6MXL, is well worth reading.

The 2014 AMSAT Symposium will be held Friday, Saturday, and Sunday, Oct 10-12 in Baltimore.  The Annual Meeting will be held Saturday afternoon from 15:45 – 17:15 EDT (19:45z – 21:15z) and will be broadcast via EchoLink on the *AMSAT* channel.  The Annual Meeting includes a report to the membership by the President and Senior Officers and includes a question and answer session where members may ask senior officers and BoD members questions.  Echolink participants may send questions using the text messaging feature of EchoLink.

Some of Friday and Saturday’s Symposium presentations may also be available via EchoLink, as these will be used to test the EchoLink hardware, software, and Internet connection.  See http://www.amsat.org for the Symposium schedule and the titles and times of the presentations.

If you haven’t used EchoLink before, you need to download the software and validate your license *NOW*.  EchoLink use is restricted to licensed radio amateurs, because EchoLink is frequently used to remotely key amateur radio transmitters and repeaters.  The validation process is used to prove that you are licensed.  See http://www.echolink.org for more information. EchoLink software is available for free for Windows, Linux, OSX, iPhone, iPad, and Android.  An Internet connection is required.

Once you’ve started EchoLink, search for the *AMSAT* channel (node #101377), select it, and “Connect”.  The channel name includes asterisks (*) both before and after AMSAT.

[The above information was collected from amsat.org]